We are proud to present you with the first stable release of the Mumble 1.4.x release series, which brings many new features, bug fixes and general improvements.

You can download the new version from our Downloads page or the GitHub release page or from within your Windows client or software package management system.

It has been over two years since we released Mumble 1.3.0. Since then many new features and improvements have found their way into the software. And not less importantly: many fixes for issues that have been encountered with Mumble. Talking about each and every change here would definitely exceed the size of any reasonable release announcement. Therefore, we will restrict ourselves to highlighting what we think are the most prominent and/or interesting changes and we invite everyone to simply try out the new version and explore what has changed yourself. For the interested reader, we of course also include a full changelog at the bottom of this page as well.

If you are wondering, why this first 1.4.x release is not versions 1.4.0, but 1.4.230, please see this recent blog post describing our new versioning scheme that explains the absence of the mentioned version numbers.

As there are many, many changes with this new version, here is a selection of things that we think are most prominent. If you’re interested in all changes, have a look at the full changelog.

Mumble has supported something it called “plugins” for a very long time. However, these plugins were not what one would typically expect when hearing about them for the first time. Instead of being general-purpose, (potentially) multi-function plugins, they were only ever dedicated for providing positional data from games (generally by reading the game’s in-memory representation). In addition to that, these plugins couldn’t really be installed and updated independently from the main application (for technical reasons) and therefore, plugins were mostly a static part of the Mumble client.

With Mumble 1.4 a new, general purpose plugin framework has been introduced. With this framework, the range of possibilities offered to plugin developers has been vastly increased and most importantly plugins are no longer restricted to positional data delivery (though that is of course still possible) and they can now be installed and updated at any time, without causing incompatibilities with the main Mumble client.

If you want to find out more about this new plugin framework (including how to write your first plugin), check out the plugin documentation.

If you have ever been on a somewhat large-ish Mumble server, you will probably know that sometimes it can be a bit hard to find a specific user or channel. Some of you might even be familiar with the feature of “free-type search” which was a built-in search functionality that worked by simply starting to type the user’s or channel’s name while the Mumble client has focus. However, this feature was very clumsy, not well documented and quite unsuitable, if the searched-for text yields more than one match on that particular server.

In order to improve on this situation, Mumble 1.4 ships with a fully featured search dialog that can be opened either via the menu bar or via the shortcut Ctrl+F (this shortcut previously toggled the channel filter but that has been re-assigned to Ctrl+Shift+F). With this dialog you can easily search for users or channels (or both) and you can even specify whether your search string is to be interpreted as a regular expression. 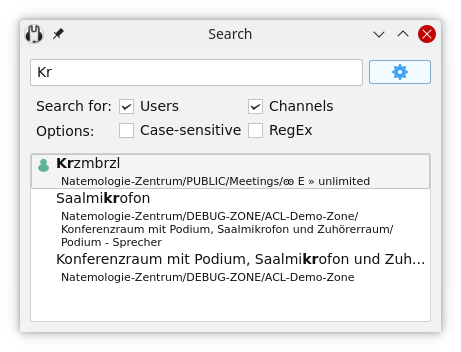 This feature can to some extent be compared to the ability to link channels. Except that this does not operate on a per-channel basis but on a per-user basis.

Concretely this new feature allows a user to “listen to” a channel. In that case all audio that is heard by people in this particular channel (be it by direct communication, shouts or via linked channels) is also heard by the listening user. Conceptually you could picture “listening to” a channel with placing a microphone in a room and then listening to what is recorded.

This feature is one-way only, meaning that in order to speak to people in the listened channel, you’ll have to either join the channel or shout to it.

It should be noted that you will not be secretly listened to with this new feature. Listening to a channel creates a new entry in the channel’s user-list (referred to as an “ear” or a “listener”) and is thereby just as visible as a user actually being in that channel. There is also a dedicated ACL and several new server config options that can restrict this new feature.

Older clients (< 1.4) will not indicate listeners in the UI though! However, they are informed if this feature is enabled on a server when they join it (via chat).

Note: This feature requires server-side support and therefore is only available on servers running at least Mumble 1.4.

Have you ever been in a situation where you heard someone talking but couldn’t quite figure out who it was? Then this feature is probably for you!

The TalkingUI can be considered the equivalent of the already existing overlay but for “non-gamers” or in other terms for everyday usage.

This feature adds an optional floating window, containing a list of currently speaking users and their respective channels. This allows you to quickly see who’s currently talking and in which channel that person currently is in (this becomes important if you want to respond to that person).

The big difference between the TalkingUI and Mumble’s main window (which of course also contains this information) is that the TalkingUI does not contain all the other UI elements nor does it necessarily show the entire channel-tree. Furthermore it automatically resizes itself to the minimal size needed to display the respective information. Thus it usually does not take up a lot of space and can therefore be left floating in the corner of the screen without consuming too much screen real estate.

Note that the TalkingUI is highly configurable (Settings -> User Interface) and also provides selection and context-menu support just as you get it in the main window. In fact, the selection between TalkingUI and main window is synchronized and thus this plays really nice with the new “whisper to selected” feature allowing to whisper to whatever currently is selected in the UI (be it a channel or a user).

In previous versions of Mumble there was no indication of whether you are able to join a channel or not. You just had to try it out and either it worked or you got a permission denied message. This feature solves this problem by marking “access-restricted” channels with a lock icon. Access restricted channels are all channels that are either only open to a specific group on the server or require a password (access token) to join.

In total, a channel can be in one of three states: either it is not access-restricted in which case it just looks like channels used to look prior to the introduction of this feature or it is indeed access-restricted. In the latter case a lock icon is shown to the right of channel name. This look can either be open and green or closed and red. Green means that you can enter the channel nonetheless (you belong to the required group or have the correct password (access token) set) whereas red means that you are not allowed to enter the channel.

Note that this is also a feature that requires server-side support and thus only takes effect on servers that are at least running Mumble version 1.4.

For those of you who don’t know what markdown is, we recommend a quick read of the respective Wikipedia article. In simple words it allows formatting of text by simply typing a few extra characters in it.

Mumble now supports markdown for text messages written in the normal chat bar. It is not supported for cases in which you use the dedicated message editor (e.g. for private messages). Furthermore only a subset of markdown is supported: sections, inline-code, code-blocks, bold, italic and strike-through text, links and quotes. Not supported are lists and tables.

This feature is probably best explained by an example. Try pasting the following text into the chat bar and see for yourself:

With version 1.4 Mumble (finally) learned how to play back stereo audio streams. This means that it is now possible to send a stereo stream to a Mumble client and it will actually be played back without being mixed down to a mono stream.

Note however that this feature is currently restricted to playback. The official Mumble client will still continue sending audio as mono. This feature is primarily intended to be made use of by (music) bots.

If you want to try this feature out yourself, you can either write a bot using pymumble version 1.2 or later or you can simply use a recent version of botamusqiue.

For those of you who are annoyed by people using excessively long or complicated names or people changing their nickname frequently, Mumble 1.4 introduces the possibility to set a nickname for users.

Depending on your configuration, a nickname will either be displayed next to a user’s name or replace it entirely.

The nickname will persist across restarts of client and server. In fact it’ll last until you either remove it again or the person the nickname was assigned to changes their client-certificate (Mumble’s way of keeping track of a user’s identity).

Note that nicknames are not tied to a particular server. That means that if you assign a nickname to a user on server A and then you meet that person again on server B, they will still have that very same nickname set on server B (the same way friends are recognized across servers as well).

This is the full changelog for this release (changes relative to the Mumble 1.3.x release series).

This is the changelog relative to our latest development snapshot.